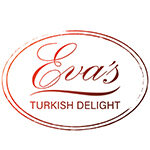 It has taken 500 years but Turkish Delight [loukoumi] has finally made it to Nelson, New Zealand. One bite will transport you back to all the sights, sounds and smells of your last trip to distant shores. Handcrafted and cut, fresh delicious Turkish Delight  has been vegan (plant-based) and gluten-free for 500 years. I use only traditional ingredients with time honored flavours using botanicals such as: rose, lemon, mint, and mandarin. A new Kiwi flavour range is being developed for feijoa, kiwifruit and boysenberry. Keep up with news via Instagram and Facebook.

Back in the Day!!
No matter where you lived in NZ, Turkish delight [loukoumi, rahat, lokum] was not a sweet you could buy in any shop, even today it’s not easy to find. Growing up in New Zealand Turkish delight was a sweet so rare, so exotic we were lucky to have it once every few years.

If you were fortunate enough to have relatives bring a box back from their travels it was treasured and saved for special occasions. For many immigrant families, it was a sweet that reminded them of home, but most Kiwis had never heard of it, let alone tasted it.
As kids the only time we had it was when my father would travel back to Greece and bring back a box or two. It was such a special treat, tender and fragrant, different colours red, pinks, yellows, greens, orange, like jewels in a box. Turkish Delight looked like coloured gems, so exotic As the box was opened the powdered sugar would fall out in clouds.
Some were covered in rose petals and others nuts but they were all so enticing and delicious. I would like to say we got a box each and gobbled them down while sitting in a cloud of powdered sugar but it was never the case. My mother would hide the boxes telling us they were for “guests”. We were crushed, why do guests get all the good stuff? Loukoumi, as it’s known in Greece or lokum in Turkey, was the good stuff. It was rare and to be able to share it with guests was a sign of great respect.
A scene from an ancient jar illustrating the Art hospitality toward strangers. 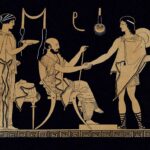 The Wrath of the Gods!
As kids, we did not understand it but every Greek family knows the rules.
It has been this way since ancient times and the rules of xenia are still followed strictly to this day in case Zeus drops by.  Put forth by the gods, the Greek laws of “xenia” demanded that hospitality, kindness, and generosity were extended to a stranger no matter social class or background to create a special bond stronger than friendship.
“Xenia” embodies the idea of hospitality and forms part of the compound word “philo-xenia” meaning “friend of the stranger”.

It is said, that the King of the Gods himself, Zeus also called “Zeus Xenios” as the protector of all travellers often wore layman’s clothes and dropped by randomly to make sure he was put up for the night. If someone turned him away, the wrath of the gods was upon him and his family. And we all know how imaginative the Greek gods were with their punishments. In ancient Greece offering hospitality to a guest was seen as an act of virtue, an honour, and has as such passed into our DNA from one generation to the next for millennia as a sacred obligation – and a matter of pride.


Turkish delight is still not readily available in New Zealand but thanks to the wanderlust of Kiwis it’s a secret that many have now tried and love.

The Most Southern Turkish Delight in the World.
After years of living abroad, we returned settling to Nelson.
A wonderful place that reminded me of the Mediterranean with its seascape and hot climate, a tourist mecca with dozens of international languages being heard as you roam the streets.
But European foods items are difficult to get I began to miss foods and sweets that are so readily availed while travelling. After extensive searches in local shops, I determine not that I could not find them but they were not here to be found. There would be no baklava, no pasteli, no Greek coffee or sheep feta cheese and defiantly no traditional Turkish Delight.

I did track down some imported Turkish delight but it was not authentic, it was stale, hard with no aroma or flavour contained gelatine and wheat starch.
I had made it before so I decided to give it a go. But was it really possible to make so far from its roots and without generations of experience? I began to source ingredients deciding early on to honour the traditional method keeping it sustainable by buying everything locally as possible if not in and around Nelson then certainly in New Zealand.
It was not like I could pop into a shop and buy the tools; I began with glass dishes as moulds, at one point I had every dish and soup bowl filled, I figured getting the quality right was more important than getting the shape right. The shapes were all over the place and still are but the texture, flavour and colour were good.
The wooden moulds would need to be handcrafted locally but could wait for now.

It has been vegan (plant-based) and gluten-free for 500 years and I wanted everyone to be able to enjoy it in the purest form. It was not easy to stick to the 3 ingredients and the hours of stirring. I had so many disasters and so many burns up and down my arms, it boils like a mud pool in Rotorua.


I can see why commercial factories have introduced a range of convenience ingredients like gelatine, glucose syrup, dextrose, acid modified starches and a bunch more.
They can make it cheaper, easier and with a quicker turnaround, but it's not authentic and certainly not plant-based or gluten-free.

Once I made a few batches (yes there were and are still disaster batches) it was addictive pure alchemy, there were so many combinations I could make.
I started to experiment with NZ flavours like boysenberry, kiwifruit and feijoa from Little Beauties, I could get the most incredible fresh walnuts and hazelnut form Uncle Joes in Nelson and the best organic botanicals and NZ corn flour not imported from China.
I could make it, but we could not eat it all, I dropped off some at the local marae, I donated some to the homeless shelter but even so, storage was now a problem.
It began as a labour of love, I must have given away more than 50 kilos of samples. One thing that kept coming through when anyone tasted it was a huge beaming smile, it was like they were being transported back to the last place they had Turkish Delight at the Grand Bazar in Turkey, the Souq in Dubai, an island paradise in the Mediterranean even a boutique in London. I got to meet a lot of new people and hear their stories.

As Covid struck and shut everything down especially our ability to travel, our memories of happier times become poignant and for many in Nelson Eva’s Turkish Delight provided a few seconds of being transport to all the smells, sights and noise of our last trip. Eva’s Turkish Delight began as an experiment to fill a personal gap but became a Covid baby start-up.

I hope you will join me and spread the message that Turkish Delight [loukoumi] is made authentically in Nelson with a New Zealand twist that everyone can enjoy. We make a large range of flavours and customised orders. Just ask for your favourite

Eva's Turkish Delight [Loukoumi] is handcrafted and hand-cut in Nelson using local ingredients, the pieces are not uniform in weight or size.
The delight is tender and soft but like all-natural sugar products it may harden or crystallise over time, this will not affect its taste but I am sure it won't be around that long.
We will endeavour to ship in a timely fashion if your chosen flavour is in stock. If it is not available production may take up to 4 days. We keep only a small amount of stock because fresh is always best. To avoid missing your favourite flavour you can order and pay online and collect it from the market on Saturday. We will refund you the shipping on collection at the market.

Your personal details are private and will not be shared with any third party.
Any comments or testimonials that are in the public domain could be shared with other platforms or to print media. Please contact us if this is not acceptable.

All orders are shipped with NZ Post using Track Pack. The service is overnight in most instances except for rural addresses
If your order is ready on Friday it will not be shipped until the following Monday to avoid being exposed to unsuitable conditions in warehouses. If you would like a Saturday delivery please advise when ordering there is an additional cost for this service.
Once the order is collected an automated email will be sent to your email with shipping details.

The Turkish Delight is made fresh Weekley and shipped nationwide. In the unlikely event that there are any issues please contact us directly for a resolution.
For health and safety reasons we are unable to accept back any products.
Special customised or limited edition orders can not be cancelled or refunded.
Once the order has been dispatched it can not be refunded.
Orders (rose, lemon, mint, mandarin ) can be cancelled if they have not been shipped. A refund will be issued back to the originating account after 3 working days. Any costs incurred will be deducted from the amount refunded.
© Copyright 2021 - Nelson Market, New Zealand - All Rights Reserved. a slightly different website
Back To Top
Close search
Cart